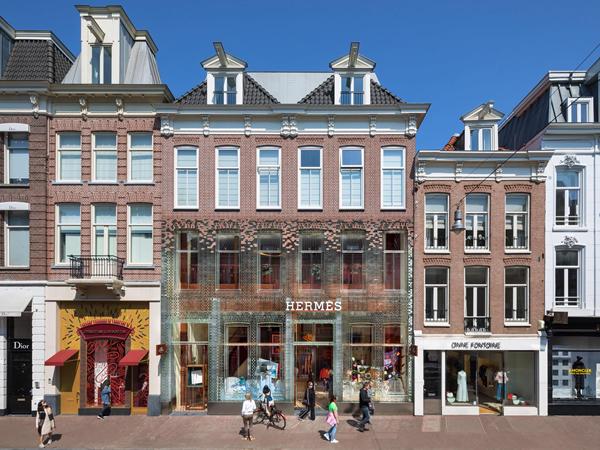 Crystal Houses, the Amsterdam store designed by MVRDV that received international acclaim upon its opening in 2016, has re-opened with a new tenant and a façade which is finally as open as originally intended.

The project’s jewel-like façade was proposed as a way for Amsterdam to be home to distinctive, upmarket flagship stores without compromising the city’s historical character. Located on the high-end shopping street PC Hooftstraat, Crystal Houses initially hosted a temporary store for Chanel, but it has now been renovated and re-opened for French luxury brand Hermès.

Created for Amsterdam-based retail real-estate company Warenar, Crystal Houses was envisioned as a recreation of the traditional houses that make up PC Hooftstraat, with a dramatic twist: the usual brick façade is replaced by a glass replica, which dissolves into the traditional terracotta bricks on the upper level.

The effect required a period of intense research undertaken with the collaboration of TU Delft, engineers ABT, and contractor Wessels Zeist, and with materials provided by glass manufacturer Poesia and Delo Industrial Adhesives. The outcome was a dreamlike shopfront which combines the intricate complexity of traditional brick construction with the transparency of a retail façade.

However, due to the spatial requirements of the temporary Chanel store, the impact of this transparency was previously diminished by a blind wall on the first floor, behind the upper portion of the glass façade. In the new Hermès store, interior designers Bureau de Binnenstad removed this wall and opened the floor to the exterior, for the first time allowing visitors to see the dissolving effect where the glass bricks meet terracotta bricks close up – and finally taking full advantage of the transparency of the innovative design.

Register now for the Trosifol® web seminar „Trosifol® WinSLT“
This course will cover the basics of light and solar control glazing options while learning how to use Trosifol’s WinSLT optical and solar calculator.
OKALUX is back on track: New owner, new Managing Director, clear strategy
OKALUX Glastechnik GmbH has passed the consolidation phase and is now getting off to a flying start with a new owner and new Managing Director.
Guardian Glass Project: Dickens Yard
For the glazed façade, the architects wanted a neutral appearance so that the glass would blend in well with the surrounding historical buildings and also required glazing that would provide excellent solar control.
Bird Safe Glass – design rules to meet your budget and minimize bird collisions
Architects can minimize costs related to bird safe glass design rules with smart decisions in the planning phase.
Vitro Glass-clad Calgary Central Library continues to earn accolades
SOLARBAN, STARPHIRE glasses integral to one of world’s “most stunning” libraries
Eastman signs strategic partnership with SEEN AG
To address the global challenge of birds colliding with glass in buildings, Eastman, manufacturer of Saflex® PVB interlayers for architectural applications, proudly announces a collaboration with Rouven Seidler, founder of SEEN AG.