Futurium, Berlin: Where the future is present - Schüco 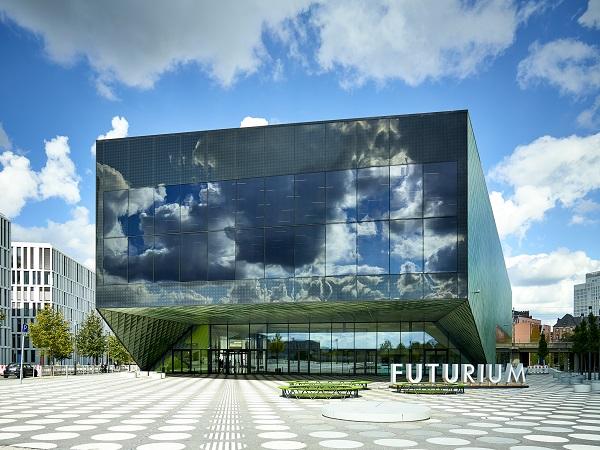 Thanks to two large structural glazing façades from the VISS SG steel profile system from Schüco Jansen Steel Systems, visitors are always able to connect these future worlds on show inside with the reality of the world outside.

A unique building of the future has been built in the centre of Berlin. The “Futurium” – a joint project by the German Ministry of Education and Research, scientific organisations, foundations and various research companies – aims to provide insights into the world of tomorrow and present scenarios for possible futures through exhibitions, events and the laboratory.

Thanks to two large structural glazing façades from the VISS SG steel profile system from Schüco Jansen Steel Systems, visitors are always able to connect these future worlds on show inside with the reality of the world outside.

The international and anonymous two-stage competition was won by Berlin architects Christoph Richter and Jan Musikowski with JUCA Landschaftsarchitekten, out of a total of 163 entries. Despite the pair having no comparable previous experience, the public-sector clients placed their trust in the young architects to work with them to realise their ambitious design.

Alongside the fundamental requirement for creating a successful building – sensitively responding to the genius loci, the spirit of the place – the story behind the creation of this project is also a shining example of how to realise innovative architecture.

With a number of special constructions, the architects pushed the boundaries of what is currently possible. The indispensable requirement for this is a constructive working relationship and willingness to learn from each other.

Very early on, the expertise of partners from the industry was required. Schüco Jansen Steel Systems also contributed the knowledge needed for active involvement along with their experience to realise the ambitious design.

A good example of the cooperation between everyone involved in the planning in terms of the load-bearing structure, façade design, building physics and architecture is the two screen façades in the exhibition space on the top floor.

The steel and glass constructions overlooking the forecourts to the north and south resemble shining screens from the outside, not dissimilar to the display of an oversized smartphone.

They measure 28 by 8 metres (facing south, looking onto the German Chancellery and Bundestag) and 28 by 12 metres (facing north-east, with a view of the Charité hospital and central train station).

In addition to the design requirements for maximum pane formats and minimised load-bearing structures, there were also structural requirements for sound reduction, thermal insulation, sun shading, darkening, wind loads, fire protection and safety barrier loading which had to be fulfilled.

The triple insulating glass used here in a suspended mullion/transom construction is approximately 2.3 x 4 metres and fixed as a structural glazing system with no visible glazing clips. It also functions as a safety barrier. The continuous opaque edge fields were printed black on the reverse, making them appear part of the transparent glass surface.

The key to the structural trick for the construction of the large structural glazing façades lies in the reversal of the load dispersal. The dead loads and live loads of the cantilevered intermediate floor, which measures 11 metres at the north end and 18 metres at the south, are transferred via tensioned steel bars each hanging on a steel hollow-box girder at the top.

The bars therefore always remain under tensile stress, which meant they could be very narrow. The loads of the two structural glazing façades are also transferred via these steel brackets. Reversing the structural system means that it is the horizontally tensioned transoms, not the mullions, that support the wind load.

The vertical mullions are merely inserted in between. The envisaged structural solution works as soon as all components, including the roof substructure, have a non-positive-locking connection with each other.

The two panorama façades are a project-specific solution which can only be realised with steel profiles. The architects chose the VISS SG profile system with a basic depth of just 150 millimetres and a narrow 60 millimetre face width.

VISS SG from Schüco Jansen Steel Systems is a high-quality architectural solution for constructing attractive all-glass façades in an energy-efficient way. On the north-east façade, where the largest panes were installed, this allowed almost the maximum glass size that the approval permits for this all-glass façade system to be used.

A special glazing clip anchor was developed in consultation with the contracted fabricator Metallbau Windeck GmbH, the engineering office for glass statics and a test institute.

Visitors were able to take a look behind the scenes on 16 September 2017 when the building first opened its doors to the public on “A Day in the Future. Open House at Futurium”. From 30 May to 9 June 2018 the Futurium is presenting its three exhibition topics – our future relationship with technology, nature and ourselves – as part of “Workshop Weeks”.

The whole of the Futurium is set to open in spring 2019. This will be the end of the thoroughly constructive collaboration between the many specialists involved in the construction, without whom it would have been impossible to realise the ambitious and sophisticated design. Under the direction of Christoph Richter and Jan Musikowski, they have created an architectural jewel which enhances Berlin’s River Spree in every respect.

600450
www.schueco.com
Futurium, Berlin: Where the future is present - Schüco glassonweb.com