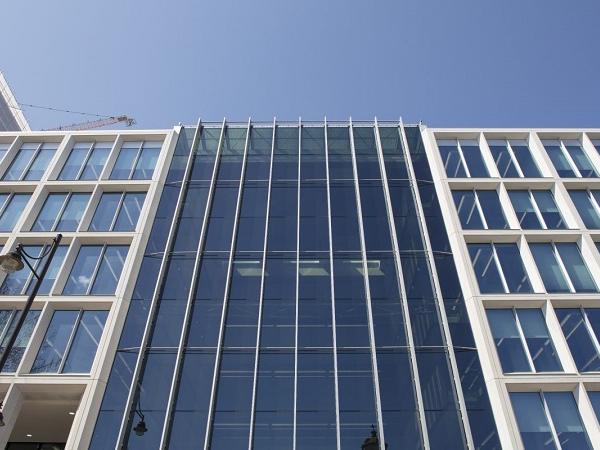 Located in the heart of Brixton, Lambeth’s Town Hall has been home to the Borough’s main civic functions for over 100 years. Now, the Grade II-listed building has undergone an extensive programme of rejuvenation – and Façade & Glazing Solutions UK was commissioned to design and install a VS-1 curtain walling system for the new Civic Office’s façade and atrium.

Led by Lambeth Council with developers Muse Developments and architect Cartwright Pickard, the ‘Your New Town Hall’ project has revitalised Lambeth’s historic Town Hall, preserving the building’s features while modernising it inside and out to make it brighter, more energy-efficient, and more accessible.

Among the functions located on the new Town Hall redevelopment site is the new Lambeth Civic Office, comprising five floors of state-of-the-art office space for Lambeth Council, in addition to a Customer Services Centre at the ground floor. Working with main contractor Morgan Sindall to deliver the architect’s vision, FGS’ façade contracting division was commissioned to design, specify and install the glazing profile for the new Lambeth Civic Office’s façade and atrium.

A key consideration for the project was that leading Lambeth music venue Electric Brixton is located immediately adjacent to the Civic Office and had to remain operational throughout the redevelopment work. For the glazing project this meant a reduced site footprint and working area, as well as additional safety and noise concerns to consider during installation.

FGS’ flagship VS-1 curtain walling system was specified by Cartwright Pickard to provide the main feature glazing on the front elevation and atrium. No other system could accommodate the required design intent; VS-1’s ability to carry large spans of glass made it the ideal choice for the atrium’s feature glazing, which is 25m high with only 1 midspan tie back. Its external-mullion-only configuration allowed FGS to create a large, unbroken internal expanse of glass, as well as allowing light-diffusing brackets to be hung externally to reduce structural load.

In addition to VS-1, capped and SG variants of Wicona’s Wictec 60 curtain walling system were used; these were proposed by FGS to meet the performance specification and budget. WICLINE 75 evo fixed-light products, featuring superior thermal insulation properties and structural integrity, were installed to create the building’s windows.

Additionally, electrochromic glass panes by Sage Glass were carried by the VS-1 system on the south elevation. This intelligent solar control glazing was specified to control the internal environment behind the large expanse of atrium VS-1 glazing.

FGS’ installation for ‘Your New Town Hall’ completed in February this year, and the Civic Office officially reopened in March. The glazing has helped the Town Hall redevelopment meet the architect’s ambitious sustainability milestones, with the Civic Office securing a BREEAM ‘Excellent’ rating.
FGS project manager, Lloyd Devey, said: “Lambeth Civic Office was a challenging project from a structural point of view, but an immensely satisfying installation to have completed, and it showcases the capabilities of our VS-1 structural system to its full advantage.

“Through close relationships with Morgan Sindall and Cartwright Pickard, the FGS team was able to develop a structural scheme that met the architect’s design intent to the letter.”

Deadline extended for Glass Focus Awards 2020
You now have until 12 noon on Friday 2 October to submit your glass focus entries.
Polflam Project: Hotel The Bridge Wroclaw – MGallery
POLFLAM® fire-resistant glass has been used in the skylight over the hotel lobby.
Tvitec contributes edification with LEED certification with its premium isolation Isolar
The glass can contribute decisively to the edification’s sustainability.
Registration open for Glass Focus Awards virtual ceremony
We are delighted to announce registration for the Glass Focus Awards 2020 virtual ceremony is now live.
FIT Show 21 record run continues
Hot on the heels of receiving record levels of support from the industry in June, FIT Show organisers have reported a record breaking Summer season with strong sales in July and August.
Podcast: Creating Structure from John Wheaton
Welcome to this discussion between host John Wheaton and guest Michael Kohler, both of Wheaton Sprague Building Envelope.