Evolution From The Past With a Vision To the Future: The Getty 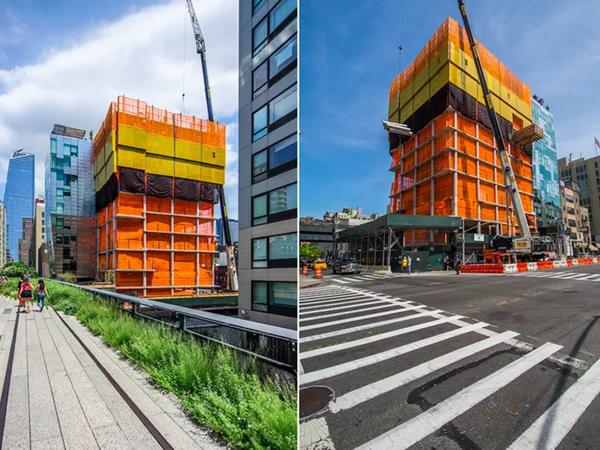 W&W Glass had several design challenges. Each glass section is a different size, so the unitized panels had to be custom made.

In the fine dining world, a trend that is extremely popular is a technique known as “deconstruction.” In simple terms, it means taking a well-known classic dish, breaking it apart into pieces, and then using many of the same ingredients to create a new offering with a different look and intensified flavors to transform the dish into something that is delicious yet oddly familiar.

That same concept can also be applied to architecture. The “deconstructionist” concept, pioneered in the early 20th century, is regaining popularity in the architectural and construction world.

Take, for example, the new building in the center of New York’s West Chelsea renaissance located at 239 Tenth Avenue.

Situated at the corner of West 24th Street, the property is located in this burgeoning art district overlooking the High Line, the park at the epicenter of new luxury apartment and condominium developments that have been underway for several years.

Here’s our take on the deconstructionist concept if you will. This building is taking the place of an old Getty gas station, hence the new mixed-use building has been coined as “The Getty.”

The location of this building has a storied history. Not that long ago, the site of the former Getty gas station was once home to an art installation of fake sheep at 239 Tenth Avenue. It seems history is repeating itself.

239 Tenth was originally designed to house ten high-end apartments. But interest from a nonresidential tenant in the location, since it is in close proximity to many art galleries, led the developers to add more commercial space while reducing the number of residential units.

Now, there will be eight totally unique units that stand on top of two prominent art galleries, and each will feature a private outdoor space, with residences averaging 4,700 square feet apiece.

The Hill Art Foundation plans to operate the museum on The Getty’s third and fourth floors showcasing the private collection of J. Tomilson Hill.

Also planned to be displayed are multiple works by Francis Bacon, Cy Twombly, and Andy Warhol.

Joining the foundation in the building will be the third New York location of the Lehmann Maupin Gallery, which will occupy The Getty’s basement and first two stories.

When you are building a structure that is housing fine art, the statement needs to be made before a patron enters the building. Marino’s design for the building will open up the facade facing the elevated park, with much of the southwest corner of the structure sliced away, yielding to a staggered set of terraced balconies.

The project is a partnership of the developers Michael Shvo and the Victor Group. One of the most complicated parts of this project was to seamlessly integrate a mix of traditional elements such as stone, glass, and metal to create drama and contrast.

Marino wanted to make a statement, so he made the decision to use a “checkerboard” of different components that feature glass at the forefront.

The designers knew they needed an expert as part of the team so construction manager Lend Lease hired W&W Glass, one of the most renowned glaziers in North America, to assist with the façade design and installation.

W&W Glass had several design challenges. This building goes against the most of the rules of typical developments where you build things for optimization by repetition and economies of scale. Each glass section is a different size, so the unitized panels had to be custom made.

The experts at W&W Glass decided to fabricate the 25,000 square-foot custom Wicona curtain wall in Northern Italy by AZA S.p.A. The final design called for powder-coated aluminum panels and over-sized low iron glass units with a maximum size of 22′ tall x 10′ wide with parallel opening operable vents that are 4′ wide and 10′ tall, motorized for ease of operation.

Some of the truly unique elements are large one piece corner units over 22′ tall with 10′ wide returns. The unitized panels use a glass make up a 1/2″ outboard lite and 3/8″ over 3/8″ laminated glass on the interior for excellent acoustics and strength, fabricated by AGC Interpane of Germany. Other significant design elements include  over-sized Schuco sliding glass doors and custom hand rails. 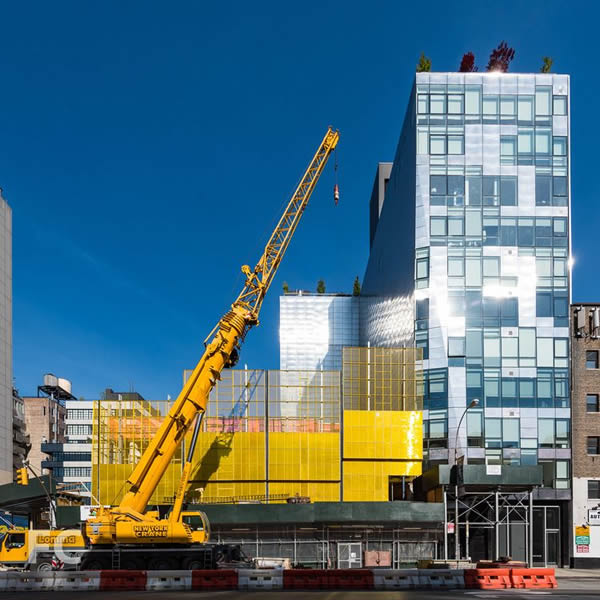 Marino achieved early fame as a designer, in the 1970s, for one of Warhol’s “Factories,” on East 66th Street. Through the years, he has enjoyed a roster of prominent clients, like Louis Vuitton, for which he designed a boutique on Fifth Avenue, and Stephen A. Schwarzman. Viewed from Tenth Avenue, the new building will prove contextual, and will appear to be roughly the same size as 245 Tenth Avenue, next door.

Even though combining dissimilar materials like steel, stone, and glass are nothing new to architecture, The Getty is taking this technique and reconstructing it into something new and exciting. Like a large-scale sculpture, perhaps, The Getty has been slow to take shape. It broke ground in November 2014 and is not expected to open until summer 2017.

600450
www.wwglass.com
Evolution From The Past With a Vision To the Future: The Getty glassonweb.com