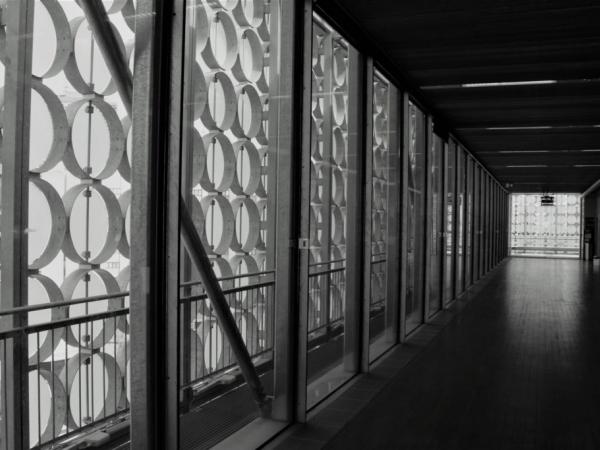 Glass started becoming the face of buildings globally, when there was a need for transparent and cleaner facades.

Over the years, its potential of making buildings smarter and greener, with the help of technology, has gained much credence.

The building of the Design Hub, Royal Melbourne Institute of Technology (RMIT) an Australian public research university acclaimed as world leaders in design research, has globally become famous as the building with a ‘smart’ skin that has offered magnificent lessons in the marrying of design and technology.

Located in Melbourne, the building has used glass to bestow a dynamic, aesthetic, greener and smarter definition to the building.

Designed by Australian award-winning architect Sean Godsell, who is known for his charismatic and avant-garde designs, alongside Peddle Thorp Architects, the building’s shining and translucent glass discs on the façade have a special intent behind their implementation.

The design of the building had to cater to two huge responsibilities—one, to incorporate a design that did justice to the Design Hub that houses researchers from different fields, and second, to its location in an important urban context, at the Swanston street axis in Melbourne that is visible from the city’s civic axis.

Apart from which, the building itself had to serve as a case study for the researchers inhabiting it. Professor Paul Gough, Pro Vice-Chancellor and Vice-President, Design and Social Context, RMIT University comments, “One of the building’s original aims was to incorporate new solar technologies into the façade and create a ‘living laboratory’ for practical learning and experimentation for leading RMIT solar researchers”.

Keeping this brief in mind, the futuristic façade of the building was conceptualised with a double skin, where the inner skin is a high performance double glazed layer, and the outer skin has 17,000 glass discs of high performance toughened laminated glass, part-automated and part-fixed.

The use of glass discs goes much further than only aesthetically providing an iconic facade to the building. The glass discs are presently being updated to incorporate photovoltaic solar cells.

Though this technology for the glass discs had been conceptualised from the beginning, the existent solar technology at the time of the construction of the building did not allow for this upgradation.

The building was then designed to be suitable to adapt to future technology. With this intervention, the technological performance of the building is set to advance while the ‘iconic’ appearance of the façade is skilfully retained.

These glass discs will orient themselves as per the sun’s position and prevailing wind or heat, behave as shading devices and collect solar energy.

Elaborating on this, Professor Gough says, “Sections of the cells track the sun via the building computer automation system opening up on a dull day, and shutting down on a sunnier one, to decrease the building’s reliance on artificial light. The nature of the façade allows it to be back-lit and rear-projected so that the entire façade has the potential to become a digital billboard.”

Fixed to aluminium axels and supported on galvanised steel frames, the glass discs huddle together to form a monumental volume. For onlookers of the building, the eyes travel up to the nine-storeyed building, making them inquisitive of the ‘sequins-like-appearance’ on the building.

The façade alone has made the building of the Design Hub, not only one of the most recognisable buildings of Melbourne, but also a largely awarded one. For its experimentation with glass, a section of the building is housed on permanent display in the Architectural Glass Collection at the Victoria and Albert Museum in London, UK.

The building is an experiment in several ways and as Professor Gough adds, “It will allow RMIT researchers to examine a range of design and engineering questions, including integrating photovoltaics into next generation glass facades”.

Şişecam presents webinar series on Designing for a New World – Post COVID-19 powered by Architect and Interiors India
The fourth episode of the webinar series will see a discussion on the many facets of glass and its use in the architectural and design realm.
BAU 2021: Building the future together
Preparations for BAU 2021 are moving full steam ahead—and that includes the work of many highly respected exhibitors.
Trex Commercial Products: Perimeter Mall – Renovation
Trex Commercial Products provided more than 1,100 lf of Track Rail along the interior stairs and common area balcony overlooks in the multi-phase transformation of Atlanta’s Perimeter Mall.
NorthGlass SiNest Yield Unusually Brilliant Results Again in Zhengzhou Construction Expo
On July 28, China (Zhengzhou) Prefabricated Building And Green Building Technology Expo opened in Zhengzhou International Convention & Exhibition Centre.
Thirsty Thursday: Preventing Glazing Surprises in Appearance Properties
This 8/13 session will focus on the appearance properties of glass and glazing to mitigate unanticipated outcomes of various treatments, presented by Steve Thomas, PE (CA) of Guardian Glass.
NorthGlass Glass Louvres Decorate KIA Visual Plaza
The building is a square structure with 16,900 pieces of SGP colored glazed laminated louver glass on the facade.