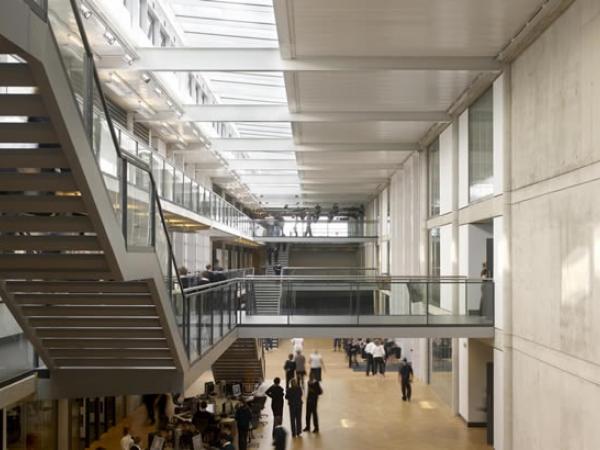 Roofglaze has designed, manufactured and installed a number of bespoke Roofglaze Solis rooflights, as an integral part of the new Primary School development at London Academy.

London Academy was originally constructed between 2002 and 2006, following the designs laid out by the highly-esteemed team of architects at Foster + Partners.

Having initially been opened as a Secondary School and Sixth Form College, there was an opportunity to provide a Primary School contained within the original London Academy Campus and offer students the chance to attend the same institution.

The benefits of natural daylight in an educational setting have been proven at length by various research studies conducted in recent years, with the key conclusions being that academic performance and student well-being improves when their exposure to natural daylight is increased.

Roofglaze was commissioned by Elliott Group to provide the desired levels of natural daylight to this project, which required the provision of 4 No. bespoke Roofglaze Solis rooflights with vertical glazed upstands.

In terms of thermal performance, these rooflights provide centre-pane U-values of 1.1W/m2k, which is a particularly impressive figure given their double glazed construction and the overall size of these units.

All four of the bespoke Roofglaze Solis rooflights installed on this project have an external span of 4220mm. The smaller skylights here range from 4542mm to 5772mm in length, with the main rooflight coming in at a considerably larger 53272mm.

Despite the large scale of the project, Roofglaze was able to design, supply and install these rooflights in good time, allowing the new London Academy Primary School to open its doors on time and as planned in September 2016.

Paul Fisher, Quantity Surveyor at Elliott Group, was very complimentary about the work carried out by Roofglaze on this project, and had the following to say about us:

“We were very impressed with the performance of Roofglaze on the London Academy project. Their site team was professional, the installation went smoothly and the finished product looks good. Many thanks to the Roofglaze Team for all their hard work. I would definitely recommend them for future works.”

FIT Show set for Fensterbau
FIT Show, the UK’s only dedicated event for the glass and glazing industry, will form part of the GGF UK Pavilion (Hall 4A, Stan 305) at Fensterbau Frontale (18 - 21 March, 2020).
WDMA Releases 2020 National Policy Agenda
The Window & Door Manufacturers Association released today the 2020 WDMA National Policy Agenda a comprehensive advocacy agenda for 2020.
Guardian Glass Project: Portomaso Business Tower 2
For the glazed façade, the architect chose Guardian SunGuard® SNX 60, a triple silver coated solar control glass that offers even better colour consistency and enhanced internal reflections.
LV Osaka sets sail, NorthGlass creates another brilliant future in Japan!
The internal and external curtain walls are all made by Tianjin NorthGlass.
Thermoseal Group Now Supplies IG Components to 48 Countries in 5 Continents
The demand for more energy efficient insulated glass (IG) components has been growing worldwide with the global drive for more energy efficient buildings.
Have your say at Glazing Summit 2020
Visitors to this year’s Glazing Summit will again be able to have their say on the issues that matter.